One of the guys in our neck of the woods used to have annual Christmas party the Saturday night before Christmas. The invite would show up in your mailbox, as well as on the bulletin board at the firehouse, by word of mouth at the general store and so on. There was no need to RSVP. There was no need to dress up. Just stop by, maybe bring a bottle and help yourself to a dizzying array of baked, broiled and slow-cooked things. The conversations around the house generally revolved around the deer you’d gotten, the deer you missed, the deer you saw and the deer other people saw. Those topics were interspersed with gossip about ongoing construction projects in town, who’d died, who’d moved off the mountain and who’d moved into the newly vacant houses. It’s where I met a good number of people I now consider close friends and how I discovered the wide and deep running skills and talents a room full of people from one corner of a small town could quietly carry with them. Who ran what farm, who had an excavator and who could find you just about anyone who had or could do anything. And it’s where I met Bernie.

While talking to a couple friends, an older fellow wandered by. Heavy set. White hair, combed back and perfect. Thick, dark-rimmed glasses. We were introduced and offered his hand which was huge and strong and thick and seemed to swallow and embarrass my own.  So distracted by the fact that my hand had gone missing in his that I thought I had to ask him to repeat his opening line.

“Excuse me?” I said, leaning in, pretending it was the noise that had garbled his introduction. I’d heard him just fine, I just didn’t understand him.

Bernie, it turned out, was a well-respected butcher in town in his time. For the next hour or so we talked meat and cuts and he told stories about his mother smoking hams in their chimney flu when he was a child. I’d explained to him the unsatisfactory results I’d had getting my deer cut at local places to the point that I’d resorted to doing a hack job of my own on my kitchen counter. It turned out that post-retirement, he’d moved all of his equipment into his garage and was cutting deer for friends in there but I could sense his reluctance to take on more. He had limited space and he was getting up in years. I tried to convey that it wasn’t getting my deer cut that I was exactly looking for – I’d really just wanted to learn to do it, the right way. Even if it meant watching him do it for others. He shrugged. He didn’t really answer definitively. We parted ways. A little while later he returned with a small piece of paper.

Knowledge, passed along, is it’s own reward.

A couple weeks later I was standing in Bernie’s garage surrounded by tables and knives and saws. Racks and hooks hung from the ceiling. A grinder that looked like it meant nothing but business sat in the back. Butcher block shined with oil. Stainless steel gleamed in the fluorescent light. We got started. Well, he did.

People who like to be known as perfectionists often let people know they consider themselves to be perfectionists. But somewhere in their lives there’s a dirty little secret they don’t talk about. An errant can in the pantry that isn’t facing the same way. A pair of dirty underwear that didn’t fall all the way into the hamper. That wasn’t Bernie.

Bernie didn’t call himself a perfectionist because he lived on a plane where there was nothing imperfect to compare it to. To announce to anyone that he was a perfectionist would be to admit that there was another world out there in which people didn’t remain strictly within rules and order that ought govern all things. I’ve heard a story told in which Bernie paused a conversation one autumn day to suspiciously watch a single leaf fall gently down to the pristine blacktop of his driveway, then walk over, pick of the leaf, carry it to the trash and dispose of it before returning to the conversation. A man like that simply wouldn’t abide pink stains of meat on trimmed fat or steaks who’s uniform thickness couldn’t be verified with a micrometer. So Bernie cut and explained and I watched and listened.

They’re not perfect, but they’re mine.

We did it a few more times and I picked up what I could. But in as much as those who love to do love even more to pass along their knowledge, there is no substitute for running chops through a band saw or working a knife through a joint to find where it breaks. Over time he’d occasionally let me trim but it was with reluctance and a mumble in half German and often the inability to even watch. For every ounce of brilliance he held as a butcher was countered with impatience as a teacher. But I persevered and suffered the slings and arrows of his frustration and learned something just as important as how to cut – and that was what to cu

Standing at the block, a front shoulder laying in front of him, he asked “how doo yooo wahnt zee show-deh?”

I stared blankly back. All I’d known in the past primitive grunts like “stew meat” or “burger.” “Roast” or “steak.” But there was more. Oh, so much more. And that’s where the true education started.

When you look at packaged meat in a grocery store, every cut has a specific name. Sirloin. Tenderloin. Top round. Bottom round. Eye round. Chuck. And, to borrow from the Byrds, to every cut a purpose. Turn, turn, turn.  That’s what my countertop meat cutting had been lacking. The relationship between a butcher and any knowledgeable customer – and eventually cook – hinged on what was being cooked. There was no sense in wasting perfectly serviceable roasts into stew meat any more than it was worth trying to cut grilling steaks from a shoulder. There was a better way. In fact, there were many better ways. It was just a matter of knowing what you were working with and what your options for it were. I learned about bone in and boning out. Separating the rounds and using the long knives to cut steaks. And I learned about the shanks – mainly, just to leave them alone. Not grinding them. Not trimming them into stew meat. Not even cutting them into ossobucco. Just letting them be shanks.

With time, Bernie aged and slowed. He wasn’t cutting deer the way he used to. Eventually he fell ill, then he then passed. When enough time had gone by, some friends and I approached his wife about purchasing some of his equipment. We’d appreciated everything he’d done for us and wanted to set up a little shop of our own to process our own deer each fall. She was reluctant at first – probably knowing full well the relative hack-jobs we’d be undertaking and not wanting to be complicit in his name. But she eventually called us back and we were able to set up a respectable shop with equipment that had been kept in pristine condition over 50+ years. 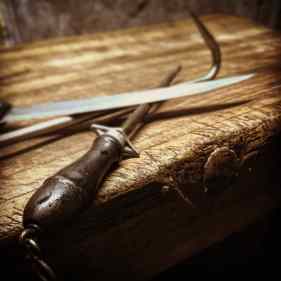 If tools could tell stories. . .

The band saw is, in a word, terrifying. It’s from an age when “safety” wasn’t the kind of thing with which manufacturers concerned themselves. If you lost a finger, that was on you. There were hooks and bins. . .stuff that demanded a quantity of meat we simply weren’t moving to make calling them back into service worth while. Then there are the knives. The handles dark with decades of fats and oils, the edges gleaming. And a block. Thick and heavy. Deep depressions worn into the spots where Bernie had stood and cut for tens of thousands of hours and where the curve of a shoulder or haunch sits cradled beautifully while you work the meat off and the joints apart.

I’ve spent the last few years standing at that table, holding those knives and trying to channel something that even approaches work that wouldn’t have sent Bernie away in a huff. But more so, what I’ve tried to do is approach my cutting in a way that asks “what” more than “how” and to pass that along to others.

With deer hanging, knife in hand I’ll take off a shoulder, cutting, pulling, explaining that there is no true joint. Dropping an imperfect front section on to the block, handing over the knife and saying, confidently, “You try.”  Knowing that their cut won’t be perfect, either. And being ok with that. Two shoulders on the block, ragged edges. Asking “what do you want to do with it.’ Hearing “I don’t know. . .stew meat, I guess.” And then the sales pitch starts. 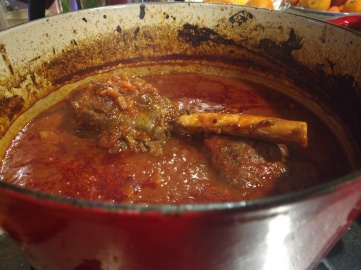 Venison shanks have become one of my very favorite cuts of meat. “More than backstraps?” you ask incredulously. In some ways, yes. Anyone can toss a backstrap on a grill and make it good. Maybe it’s perfect medium rare. Maybe you go a little too far. Either way, it’s going to be good. But to work the goodness out of the lowly shank – to charm the flavor out tenderly – to persuade all that connective tissue to break down and offer it’s very body to the sauce – that’s where the magic happens. To suffer all day in a house drenched in the aroma of vegetables and herbs and wine coaxing meat once destined for the grinder into becoming soft and flaky and tender all on it’s own – to convince my wife that only her homemade pasta will make a worthy final resting place for such a creation. That is perfection. Enough of it, anyway, for even Bernie to accept. 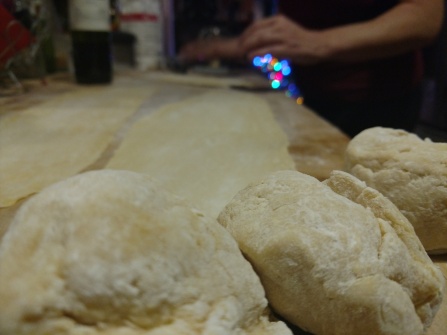 When my wife is drinking wine and making pasta, you best get out of the way and let it happen.

Venison Ragu is a classic “sunday gravy.” It takes a little time to put together and a long time of just “being in the oven.” Pick a cold or rainy day. Go sit on the couch with your dog. Light a fire in the fireplace. Watch football or a couple movies. Try to ignore the smell. Pick a good wine. Enjoy.

Heat the olive oil over medium heat in a heavy dutch oven. Season the shanks with salt and pepper and brown in the oil on all sides. Remove the shanks to a plate.

Add the diced pancetta speck / bacon and let it brown for about a minute. Add the diced vegetables, juniper berries, and herb sprigs. Cook, stirring, until the vegetables start to soften.

Add the tomato paste and stir for 2 minutes.

Add the crushed tomatoes and wine. Bring to a simmer and nestle the shanks back into the liquid. Add enough stock to submerge the meat. Cover the dutch oven and put it into the oven. Give it at least 4 hours, possibly 6, depending on the size of the shanks. They’re ready when you can easily stick a fork into the meat and twist it into a shred.

When the meat is done, remove the shanks and use a potato masher to break down what’s left of the vegetables, then cook over medium heat to reduce and thicken the sauce. Remove the meat from the bone, shred it with 2 forks and fold it back into the sauce.  Serve over wide noodles like egg noodles or pappardelle. Or as an alternative, leave the meat on the shanks and place a shank and a bit of sauce over creamy polenta.