As I stepped out of the plane and down the stairs the warm air hit my face and I smiled. Hours earlier we’d left 38 degrees and rain. It’d been a long day of legs and layovers but that was behind us. Before us lay a path over tarmac, through the terminal, into a convertible and onward to Key West and the open sea.

Sitting down to a dinner of Mexican and margaritas we made our way through small talk. How we’ve all been. How big the boys were getting. All the catching up. But I couldn’t take it anymore and I cut to the chase.

“How’s the weather looking for fishing.” I asked my father-in-law, John.

He must have seen the disappointment on my face because he immediately tried to smooth over his delivery just a bit.

“We might be able to get some fishing in on the back side. . . maybe it won’t be too bad on the reef” he clarified. But then he doubled down. “But they’re talking 3-5 foot swells anywhere past that.”

The conversation rolled on. How the fishing has been. What else was going on around the islands. But in my head I kept wandering back to the weather report. I was 2000 miles from home in a place I visit once a year and waves my kids wouldn’t deem worthy of boogie boarding were keeping us beached?.

At least there was golf. And beer. It seemed like I’d be doing more of both than I’d planned.

Later on, sitting out on the deck by the canal, my son asked me if we were going to be going fishing the next day.

He looked at the water, glass-calm in front of us, then back at me. I shrugged, then tried to compensate for the forecast.

“Well, we’re in here. It’s different out there.” And then we both stared silently back at the lights reflecting off the black-mirrored finish below the concrete pier. Our heads were in the same place. We’d come so far. . .

The next day I dropped a few more innocent questions. Made a few passive aggressive suggestions. Occasionally checked the weather out loud. I felt like a kid asking over and over and over again for something and simply being ignored. But over the course of the day I got what I translated to a definite “maybe” which, as any kid knows, means “yes.” My foot was in the door, I pushed a little more and we firmed up plans. We’d meet up at 7, get breakfast and bait and head out to see how it was. John left for the night and I winked at my boys.

In the morning, bellies and bait buckets full, we cast off out of the canal and into a light breeze coming into the bay. Clearing the channel markers, we sped up and the ripples turned to chop and then rough chop and then waves. John slowed the boat a bit as the bow started to send spray up over at us. He pointed out on the GPS a digital pin marking a wreck. The area of the screen under the pin was smattered with numbers in the 40s, 50s and 60s. Above it, The first number was “161.” Then “235.”  Then “482.”   We maneuvered the little triangle on the screen just to the left of the little pin point on the screen and dropped anchor.

I don’t know a lot about sailing. I admit that. I know there are different frames of reference for measurement. I know a “knot” is not the same as a “mile per hour.” I know a “nautical mile” is different than a “statute mile.” I know there are also “leagues” to measure depth, although my understanding is that nobody other than Jules Verne uses them. And so from all of that I can only gather that whatever they’re using to measure “3-5 foot seas” is on a completely different scale than the “3-5 feet” I’m used to on land. From where I stood, “3-5 foot seas” put me smack in the opening sequence of the old “Hawaii Five-0.” The waves alternated with swells which alternated with little tsunamis. And in rhythm between them beat the mantra: Never. Question. The. Captain.

But there we were. I’d asked for it and I’d been handed every bit of it. So we geared up and fished. And the fish bit. My older son was first. A tight line, a few cranks, slack and. . .gone. He reeled in to reveal a frayed end that was clearly sawn through by teeth. Baracuda, more than likely. I set him up again, and he set another live shrimp adrift among the waves. Just then my younger son repeated the scene, to the same end. I dug for another hook, another shrimp and he was back at it. Then John. And then Michael. And then Jake. Then John, Michael, Jake, Michael, John, John, Jake. . . .

You get the idea. We were getting robbed. Line after line was coming back sheared like fish were wielding chain saws and I’d spent the better part of an hour sitting on a bucket staring at hooks and eyes and line and shrimp and I was starting to get a headache. I looked up and around to stretch my neck and my eyes a bit and then remembered where I was. I watched around us and larger and larger swells pushed their way under and around the hull. But these weren’t the waves I was used to. They were teal. And . . solid. And around me my boat mates had braced their hips against the sides, knees bending, feet dancing.

With head now clear, it occurred to me: We had to make a change. We were getting outplayed by the fish. I pushed through a few drawers and pulled out some wire leader. Joke’s on them. Bite this.

The lines went over and in short order John had a bite. He reeled and in a minute a sharp silver missile sliced along the side of the boat. Barracuda. He was ours now. Game over. John brought the fish up over the gunwale but as he did it flipped free and fell to the deck. Now, the boat bobbing, the fish flopping and me, in flip flops, dancing around the deck trying to spare my toes. Laying like superman across the top of the bucket been sitting on I managed to open the lid on the fish box just as the boat rolled and the fish skimmed across the deck, on to the ice and I dropped the door shut.

I’d always believed that barracuda were a kind of toxic forbidden fruit, but a few weeks ago I’d read an article indicating just the opposite. I was willing to give it a shot and over the last couple days I’d been talking a big game about trying it. Now we had one.

We didn’t fish for much longer. We weren’t skunked, we were getting tossed around pretty good and we were all getting tired of fighting for balance. As we drew up the anchor, stowed the gear and peeled back through the crystal teal water toward home, I was thankful for getting a shot at the fish but contrite for second-guessing the weather.

Back at the dock, we unloaded and the pelicans gathered instinctively. I opened the box but where the ‘cuda was, as if transformed by some nautical magic trick, there wasn’t a barracuda at all. There in the box lay a long silver fish dashed with yellow and blue. A Cero mackerel. I’m not going to tell you I didn’t breathe a little sigh of relief at side-stepping any risk – real or imagined – of ciguatera poisoning. I held the fish up with a smile. It wasn’t a lot, but with a little imagination we could stretch it into dinner for us all. 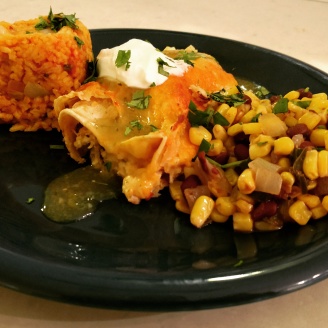 1 ½ lbs of firm seafood (fish, shrimp, crab, etc) in bite-sized chunks
1 poblano pepper, seeded and diced
1 small onion diced
1 bunch of cilantro, finely chopped
Some kind of Mexican-style chili-based sauce such as taco, adobo, etc. (How much you use depends on your tolerance for the spice in the one you have. Taste a little and you’ll add it accordingly. )
3 T butter
3 T flour
2 cups of milk
1 cups of queso blanco or queso fresco, roughly shredded or chopped finely
1 pkg of corn tortillas

Heat the olive oil in a large pan over medium heat and add the onion. Stir for a few minutes until it just begins to get soft, then add the poblano pepper. Cook, stirring until the onion and pepper are soft, then add the chopped shrimp. When the shrimp start to turn pink, add the crab, cook for a few more minutes then add the fish and the chili sauce.When it’s all cooked through, toss in a handful of the cilantro and stir. Give it a taste and add more sauce if you want it spicier. Put a colander over a bowl and dump the fish mixture into the colander to strain. (Make sure to keep the liquid)

Melt the butter in a medium saucepan over low heat then stir in the flour. Keep stirring for about 5 minutes to make a light roux. Little by little, whisk in the milk. As each batch of milk is absorbed, whisk in more until you have a thick, creamy sauce. Once all the milk has been added, whisk in the liquid that drained out of the fish mixture. (Keep the fish mixture set aside). Finally, whisk in half of the cheese until it’s as melted as it will get. It’s ok if it stays a little lumpy but get it as far as it will go. Mix in 2 T of minced cilantro.

Heat up the corn tortillas (they’ll crack and crumble if you don’t) You can do it in an oven (careful not to dry them out), over a gas burner or in the microwave. If, at any time, the tortillas start to crack as you’re rolling, reheat them.

Pour enough of the cheese sauce into a 9×13 baking dish to just cover the bottom.

Spoon enough filling onto the middle of a tortilla to make a about a 1” pile across the full width of the diameter. Fold the side of tortilla closest to you over the filling, tuck it under the filling and then roll it up. Gently place the roll into one end of the pan, seam down, tucked against the side of the dish.

That’s one. Now do it again. And again. Over and over, tucking each tortilla and fish roll up against the last. Continue on until all of the enchiladas are snuggled in as tightly as they’ll fit without cramming them in too tightly. When the pan is full, dump the remaining cheese sauce over the entire lot of them, being sure to cover the whole pan. Give it a couple gentle shakes to settle the sauce in then sprinkle the remaining half of the cheese over the entire pan.

Now into the oven for 30 minutes. When they come out, let them cool for 10 minutes before serving. Find the edge of a roll and work in toward the edge of the pan. Garnish them with a little more cilantro, sour cream and salsa verde. I served mine with Spanish rice and black beans and corn. Oh, and of course, margaritas.