Confused? Allow me to explain further.

I don’t normally answer my personal phone at work unless I’m positive I should take the call. And that’s if I get the call at all – I work in a spot with a pretty weak signal and a lot of my incoming calls go straight to voicemail. But this call I got. I didn’t recognize the number but it was from my area code. I got up, shut my door and answered.

I paused, running through my mental rolodex in search of a “Stacy”

I paused again, and then recognition slowly crept forward from the back of my mind.

“Hey, listen. . .I have kind of a strange question”

Of course she did. People you only run into here and there don’t generally call out of the blue just to chat. I might have been wishing I’d stuck to my “don’t answer the phone” rule. What was it going to be. . help moving. . . borrow my chain saw. . .

And with that, I was in. It was like that slap on the cheek the mob boss gives you. I didn’t ask to be in, but I couldn’t turn it down now.

I explained that I’ve hunted turkeys before, but that it’s an entirely different ballgame. That’s a shotgun and they’re 40 yards away. But I explained the mechanics as best I could. Some things I’d seen or read. Then I got as quickly away from “step 1” as I could and got into step 2 – the part with which I have far more experience and – how to handle the meat. We chatted for a bit longer, she thanked me for my input and we hung up. 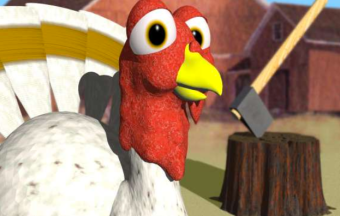 Like an ancient spice trader, the “what’s in it for me” wheels began to turn. I’ve never been any good at saying “no” to people’s requests for favors.I hadn’t secured a thanksgiving turkey yet. And I was always up for a new adventure and an opportunity to learn something along the way.

“I’ll tell you what” I bargained. “If you get me one of those live turkeys, bring them all over and we’ll take care of them at my house.”

Done and done. She agreed far faster than I had anticipated. Damn it. I could have gotten more. We chatted for a bit longer and hung up.

In recalling that conversation I play my part back in a strong voice. I was confident. I was knowledgable. I was authoritative. The truth is, I was clueless.

I mean, I know a little bit about killing turkeys. And by a little I mean next to nothing.  I’d seen it done before. . .by cartoon pilgrims and farmers. I don’t own a blunderbuss, so I figured I’d have to go with an axe. You’ve seen that. . .  the farmer . . .the ax . . . the turkey . . . the tree stump? Yeah, me, too. It was a start and based on where I was currently standing, those cartoons might as well have been the Chilton’s manual.

I went to my computer, opened Google and got busy becoming an expert.

On the positive side, these guys didn’t have to listen to their drunk, crazy uncle rant about politics. So they had that going for them.

On the Sunday evening before Thanksgiving, Stacy and her sister Kelly Ann pulled up in her husband’s pick up, a dog crate in the back and in the crate, three confused and wind-blown white and black mottled Toms. We gathered around the tailgate, looked them over, talked, joked uncomfortably and tossed around some ideas for getting them to the back yard. It was all just a nervous attempt at putting off the task at hand but in the quickly fading light we realized that these things weren’t going to take care of themselves. I collected a few things; among them a pair of gloves, a length of 2×8, and a hatchet.

I’ve hunted a lot and in doing so I’ve killed quite a few animals. I never take it lightly. The thing about hunting though, is that it’s a complete package. You gear up. You get up. You get ready. You make a trek. You sit in quiet anticipation not really knowing if you’ll see anything at all. If you do, you still don’t know how things will turn out. You have to beat an animal at it’s own game. In turkey hunting for instance, it’s about convincing something that is a turkey that you – something that is not a turkey – are a turkey. Sometimes they know immediately. Sometimes they come in, then spook and leave. And sometimes you win.

This was different. The outcome wasn’t really in doubt at all. It was like watching a tired, formulaic movie play out. Except we weren’t just watching. We were on the movie screen. These weren’t frozen, saline-injected, shrink-wrapped spheres delivered to us in a neat, easy to handle, roast-and-carve format. We were the actors. I was the “good guy” and I would win. The turkeys were the stooges and they would die. And in a twist-of-plot, expected by some, perhaps not by others, there would be a moment when the audience questioned the outcome. As if to wonder if that’s the way it had to end. While it played out, Kelly Ann stood off to the side and looked away. She had come to see the movie, too, but would cover her eyes during the gory parts. I couldn’t fault her.

As I settle in to take care of business, I glanced around the yard and in the moment it became no small wonder to me that public executions were such the spectacle back in the day. Whereas were I at the store picking out a frozen turkey, I’d very likely be doing so alone. Yet here we were in the yard and a small crowd seemed to have gathered to bear witness.

The whole thing went as quickly and smoothly as can be expected. The turkeys did not run around the way their cousins the chickens are said to. They had a few nervous spasms but otherwise were done-for quickly. One in particular – the last one – got a final bit of payback, launching blood around on all of us as if from some Supersoaker of Horrors. It seems cliche to say the yard looked like a murder scene. It was a murder scene.

Stacy’s son Wyatt had come along to help in the eager way an 8 year old boy always wants to. I had my boys come outside as well. Not because I wanted them to see something die at my hands but because I wanted them to know that something did. On Thanksgiving, millions upon millions of inflated balls of golden meat vaguely shaped like something resembling something that used to be a bird would alight upon tables around the nation, but very few people would give it much thought beyond that. I think it’s important for them to know what’s involved in “making food.” We, as I always insist, would have a connection to our food.

We gutted the birds and packaged up the livers, the hearts and all the other bits that normally come bundled in a wax paper bag stuffed into the cavity. We hung the birds to age for a few days and the night before thanksgiving we got together again to dip them, pluck them, pick them over and rest them up for the big day.

I’m a fan of brining my birds and while I did want to be able to taste all of the turkeyness I’d just brought about the old fashioned way, I also wanted ensure a tender, juicy heap of deliciousness for my guests. For the past several years I’ve been using the brining recipe for “Spruced Up Turkey” by Patrick O’Connell of the Inn at Little Washington. Mostly because I’m a big fanboy of his, but also because it works and when you tell people what’s in it, it’s an intriguing list to rattle off.

Of the three birds we had between us, all underwent different cooking methods. Stacy roasted one whole and broke one down into individual pieces to be cooked separately. I heard individually from people who were there that everyone was thrilled with the outcome. This year, I tried something new. Whereas in the past I’ve always roasted my turkey in it’s native format, this year I took a swing at butterflying it. That is, cutting out the spine and forcing the formerly globular bird flat, skin-side-up like a mercator projection turkey. How did it go? It went in a way that convinced me that that’s how I should have been doing it all along, and that it’s how I’ll be doing it in the future. A 13 lb turkey was done in less than 2 hours. It was golden and juicy and tender and delicious and even presentable (if you’re into that sort of thing). Unfortunately, “go time” for us on Thanksgiving being what it is, I never stopped to photograph it and the carnage afterward was less than photogenic.

Would I do it all again? The live turkeys. The blood stains on the jeans I should have changed beforehand. The gutting. The plucking. It was a lot of work. But yeah. Yeah, I would. If for no other reason than there’s a weird, twisted part of me that thinks that despite all the extra work – or maybe because of it –  it’s how it should be done.